Mounting genuine roofbar mouldings - how difficult is it?

Hi Folks,
Just got myself a CX-3... A question about mounting the roofbars, the mouldings in particular. How difficult is it to replace the original mouldings with the roofbar-compatible ones? Is it a matter of just undoing a couple of screws or something similar, or is there anything arcane about it? Is it possible to mess anything up in there? The dealer wants to install them themselves; however, call me a tight git, but I'm not too keen on paying someone to put bars on the roof - sounds a bit too lazy.

Not done it personally, but you prise up the windscreen end of the moulding and then pop it off clips along its length, and then install the new mouldings that have cut-outs to reveal the bolt holes in the roof. e.g. this YouTube video -


The following shows an illustration of the process (on a CX-5):

jtonline wrote: ↑
Fri Apr 01, 2022 3:35 pm
Not done it personally, but you prise up the windscreen end of the moulding and then pop it off clips along its length, and then install the new mouldings that have cut-outs to reveal the bolt holes in the roof. e.g. this YouTube video -


The following shows an illustration of the process (on a CX-5):

Thanks jtonline, I might give it a go - the dealership want 55 quid for it. Or might see if my local garage can do it for something more reasonable.
Top

Hiya,
The reason why I decided to go for the Mazda ones are the feet. The Thule foot packs showing as suitable for the CX-3 have clamps that go over the side, which I don't like the look of, and from the previous experience (on a Toyota Avensis, but the feet were the same design), it can dent the roof, and abrade the paint under the feet. OK, the denting was probably me over-tightening it, and it wasn't massive, but I have no idea what the required torque is, nor do I have a torque wrench for it, so it could happen again. Overall, it just seems like a workaround - Thule seem to prefer selling an all-you-need-in-a-box solution, and they can't do it if additional original parts are required.
The Mazda ones, as far as I understand, are fixed over the mouldings, using proper mounting points. The factory ones, at least on mine, don't have holes in them, so they need to be replaced. But it's a much better solution; the cost is below Thule's (I think) - 157 quid for the aero bars/feet, and 25 quid for a pair of mouldings. And they look neat; and, for all I know, the bars may actually be Thule - a lot of other accessories like bike carriers and roof boxes on Mazda website are theirs.
The only trouble, and the reason for the original post, is that I don't know how to replace the mouldings. While not completely useless with my hands, I am not a car person, so I'd rather have someone who knows what they're doing to do it - or at least show me. But the Kendal dealer wants 55 quid for something that should take about 10 mins, if YouTube is anything to go by. I'll see if the local garage I use for other things can do it for less.
Top

Good afternoon Paul. I came across your post and felt I had to share my experience with you. I installed the exact roof rack you want, back in Sept 2000. It cost me $379 CDN from Amazon Canada. This is the listing h t t p s://www.amazon.ca/Mazda-Luggage-Baggage-Car ... 51&sr=8-13
You do not need to be an auto mechanic. It took me about 2 hours but that was because of the learning curve to get the installation %100. With knowledge it should only take about an hour. I'd be more than willing to share with you my experience if you decide to undertake this project on your own. Good luck with your project. 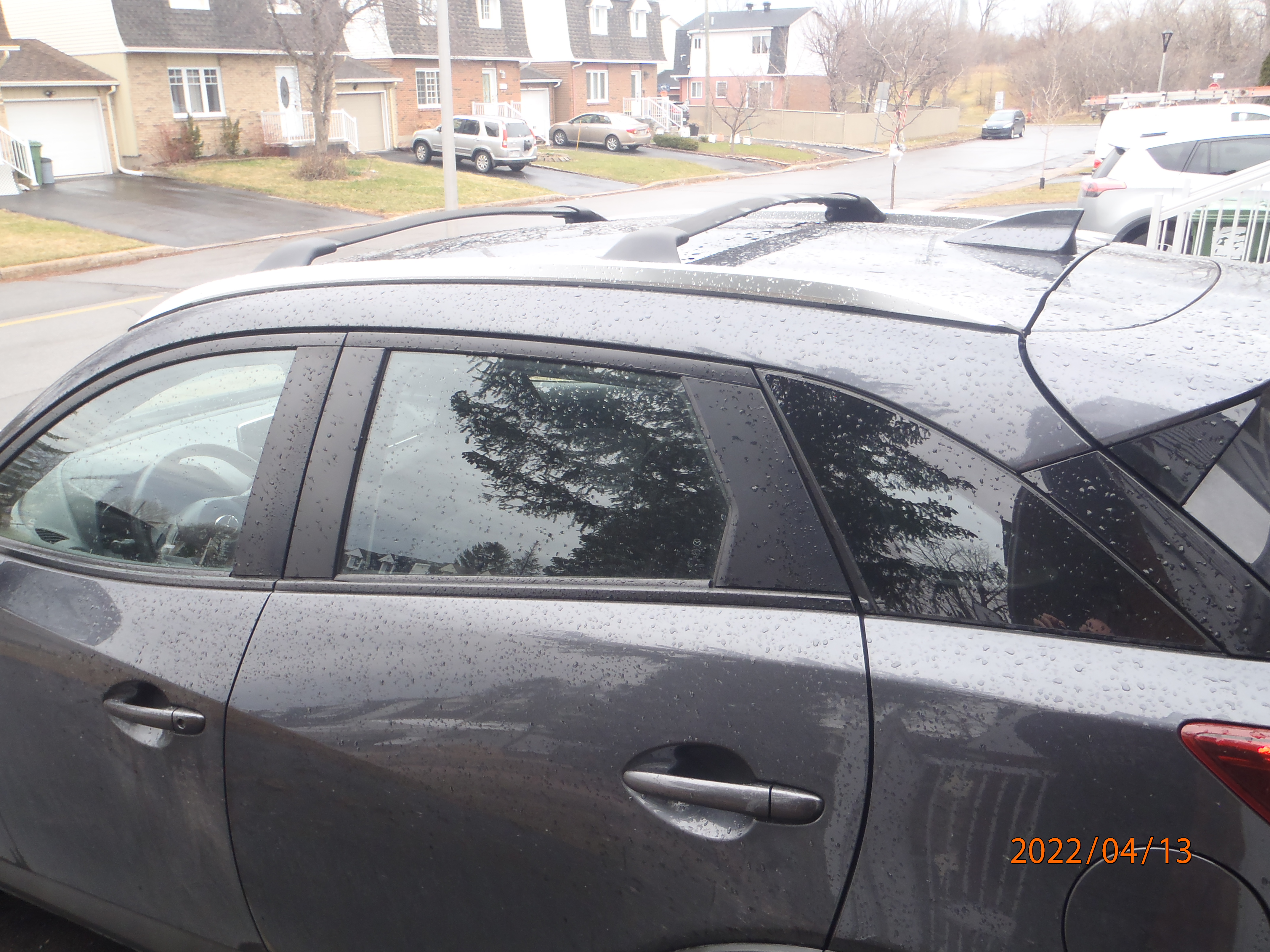 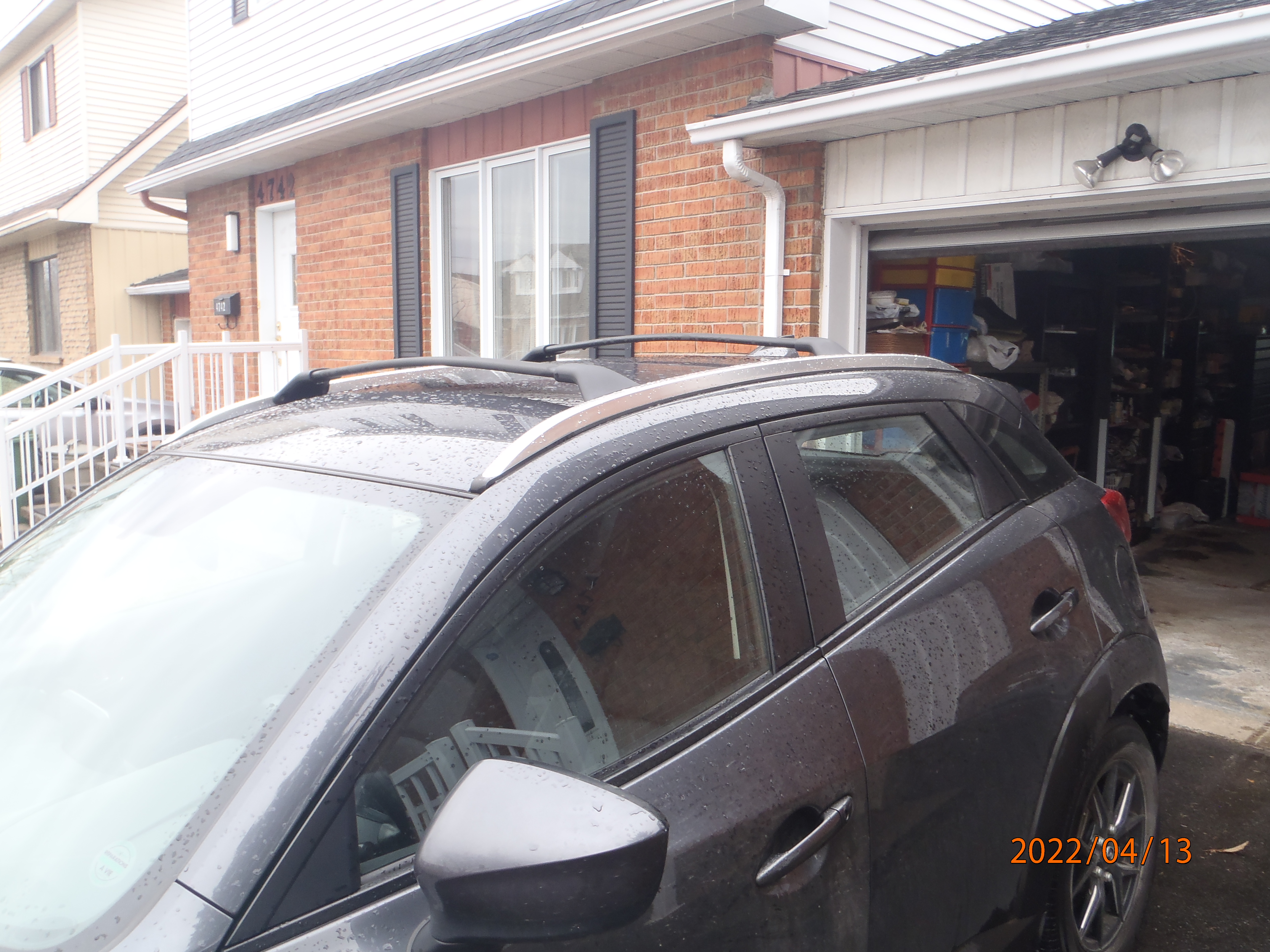 Thanks frog8fly! I just picked them up - both the bars and the mouldings, although just mouldings, not rails like yours. I'll try to do it myself - I've seen a few bits of advice and instructions online, and it seems like a straightforward enough process. I do feel a bit apprehensive about pulling off and twisting things, but that's how stuff seems to be fastened these days - virtually nothing is screwed on, everything is on clips of some kind. I'll let you know if I get stuck - thanks again!

As an aside, I am impressed by the mouldings. There's a lot more to them than just some plastic (metal profile with plastic covering, plus various other bits and bobs - quite complex, in fact!), and at £25 a pair I'd say it's a pretty damn good deal, keeping in mind how over-priced these things tend to be.

The 'original' bars are, as I thought, Thule - the feet have 'Made by Thule...' and their Swedish address on the inside. Now, the funny thing is, and that's getting back to the question of why 'original' Mazda bars. I just took a look on Thule's website, and the cheapest aero bar set (WingBar Evo) is listed for £269. I have just paid £190 for the set AND the mouldings. OK, some installation is required (£55 if you don't want to do it yourself), but even at that it comes up to less than Thule, and you'll have bars fixed to the proper points, not hooked to the edges. The only difference is that the 'original' bars are symmetrical in profile, not wing- or teardrop-shaped as are, as far as I understand, the WingBar Evo. Whether it makes any difference, I don't know, but I doubt it.

Now, I am wondering if the footpack from my old Mazda6 would have fitted as well. The bars would probably too long, but there's a chance that the feet might have been identical.
Top

Please post a Pic of your install. Would like to see the results. Best of luck.
2016 CX-3 GX Sport Auto AWD Meteor Grey
Canada
Top

Thanks mate - I'll take a snap tomorrow; it's dark now.
But basically, reporting back... Installed them today, and it couldn't be any easier. Took me between an hour and two - hard to be precise, since I was on and off at it.
Removing the mouldings took about 5 mins, of which 4.5 mins went into washing the channels under them - there was a lot of dirt there. Other than that, there are three clips per side - a T-stud at either end, and a clip somewhere towards the middle.
Here there are some instructions for moulding removal on Mazda 3, and on my CX-3 it was exactly like this. NB: installation is different - on CX-3 it's a lot simpler; the mouldings just clip back in.
https://mazdashop.ca/blogs/news/how-to- ... zda3-sport

As an aside, I can't see why one couldn't just drill holes in the old moulding to save £25. You'd need some sort of a bung for the holes for when the bars aren't installed, but that could be resolved, too. Other than that, there's nothing different about the replacement mouldings.

The rest of it is about as complicated as building a Meccano set, or a piece of IKEA furniture. The instructions are very similar, too - all pictures, but very clear. At any rate, it's the same as any other modern Thule similar footpack. Takes a while simply because there are quite a few parts to put together, but you only need to do it once. I sort of see why the dealers wanted to charge me £55 (although I did ask them for mouldings only, which would take, as I said, 5 mins, but I suspect they meant the whole thing). I reckon if you have done it before and don't need to check the instructions at every step, it could all be done in half an hour tops, but that's dealers for you - always liberal with how much time they bill for, and how much per hour it is. Anyway.

Three things about the installation process... The sliding covers in the new mouldings - the bits of plastic that need to be removed to reveal the holes - are very stiff. I ended up pushing them off with a taped up screwdriver which slipped a couple of times and would have scratched them. No big deal, but I was glad it was taped up; and I don't think you could do it with just the fingers - I've tried. May be worth removing them before installing the mouldings, but you'll have to do it every time the bars come on and off, anyway.
The other one is about the rubber strip that goes into the channels in the bars. The instructions say to slide them in from the side, but I found it too tedious - they don't want to go in, even if you moisten them. It's a lot easier to push them in from the top.
And the threaded bars that screw into the attachment points on the roof are really begging for some grease/loctite. I seem to remember that they used to have a hex sot at the end, but not any more, so if they seize in there, you'll have some fun times getting them out.

Other than that... Really pleased with it. As I said, I'll post a picture tomorrow, but for £190 you get a full set of Thule aero bars that attach to the proper points and not over the sides. You can even use the old mouldings to make is £165, if you don't mind some drilling. As usual with Thule, everything is sturdy and looks neat. Taking them on and off won't be a problem either, and usually takes about 10 minutes.
Top 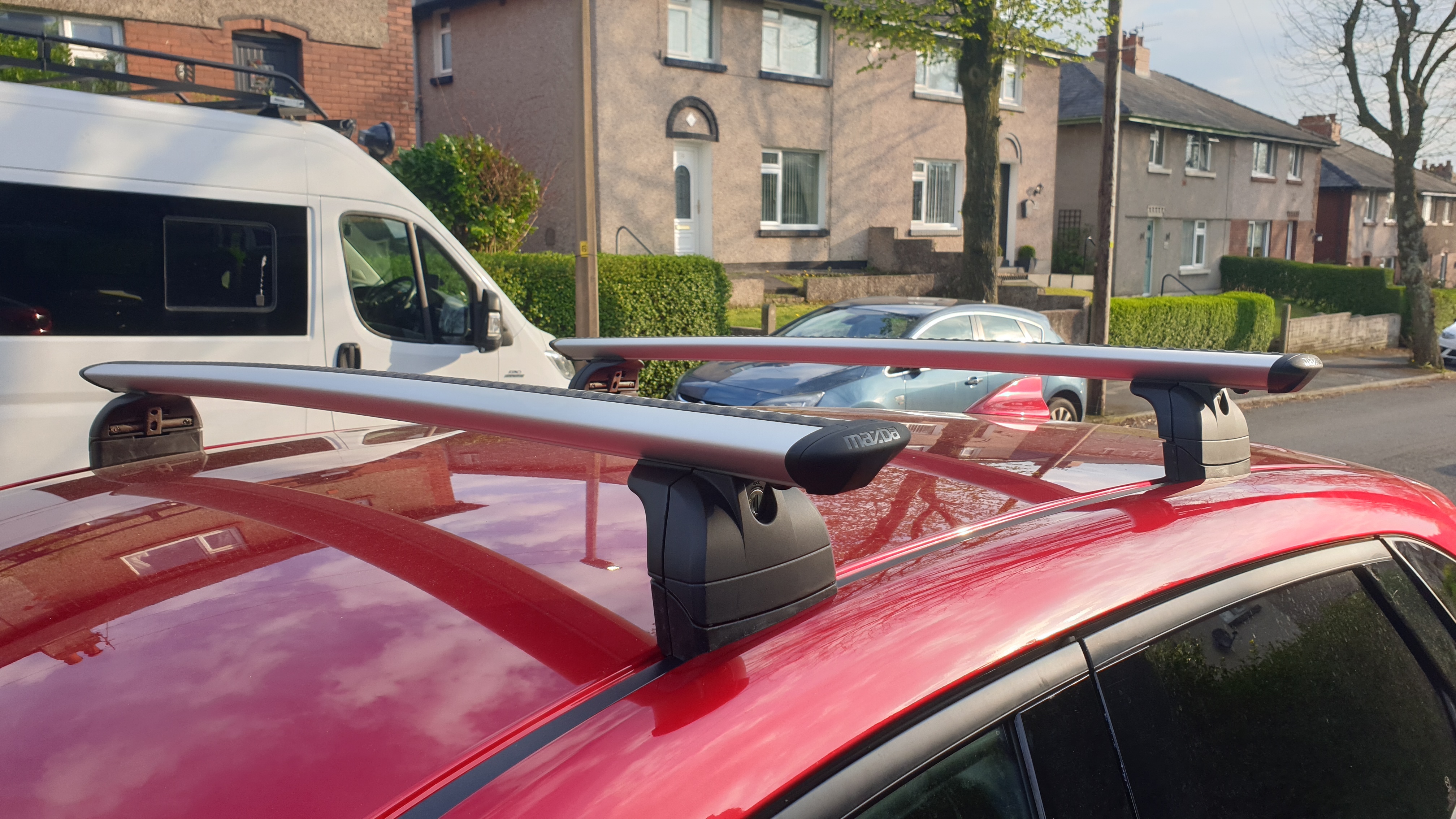 Our Mazda CX-3 Forums are free to join and open to all.